She’s astig man, she got that deviant/ progressive/ alternative style which I thought is the reason she won that avant-garde challenge. Too bad she lost on that last Terno challenge, which am I thought not really her forte… People thought that she doesn’t really have that confident to win and her skills are not really good but I guess that will just push or motivate a person up, to excel more. I just wonder, what would be her next project – shirt designs and stuff? Or more Mara Reyes on tv? Yeba! Check her stuff: swatheclothing.multiply.com 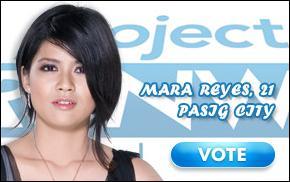 Mara Reyes is a 21 year old designer from Pasig City. She is a fine arts student and visual artist and now works as a costume designer. She previously worked with Ava Paguyo so the two have already known each other for some time before the competition. The 21 year old Mara Reyes got the boot out in the 11th episode of Project Runway Philippines. Mara Reyes Project Runway Philippines career came to an end in the Terno Design Challenge. Three designers are left; one of them would be the winner.